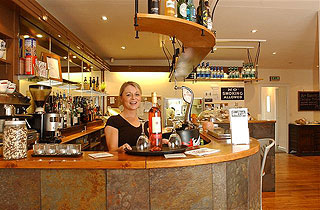 Chef Douglas Smith has been impressing the food critics with his cooking talents for almost 20 years.

He has won a string of national awards and cooked for a host of VIP diners.

Now one of Scotlands most accomplished chefs, Douglas has taken the bold step of opening his own café-bar-brasserie - Saffys - in the heart of Ayr.

A glance at some of the comments he inspired while head chef at Enterkine House and McCallums Oyster Bar only serve to confirm his status as one of the countrys most exciting culinary talents.

Winning awards and receiving praise from the critics is gratifying, says Douglas, but as chef/proprietor at Saffys I have another audience to impress - the customers.

In the few months since Saffys opened, Douglas has already attracted a growing customer base amongst town centre shoppers, the business community and visitors to town.

Douglas adds: Great food should not have to cost the earth and hopefully diners will find something to delight them, at a price that wont break the budget.